Colorado Parks and Wildlife Service commissioned Beaver Park project, as designed by AECOM. The project’s intent was to mitigate erosion-derived sinkholes that were undermining the dam and spillway structure. Aslan Construction was the low bidding contractor on phase one and began work at the dam in the summer of 2013, near the Colorado town of South Fork. Aslan finished work in the spring of 2014 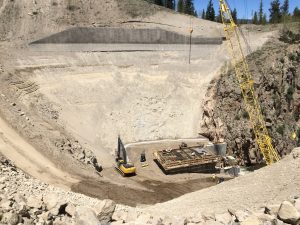 Aslan successfully oversaw an intensive consolidated underground grouting program for fractured rock beneath an overflow spillway at the dam and an adjacent a U.S. Forest Service road. This included drilling, casing and grouting more than 70 holes at varying depths, as determined in the field with drilling subcontractor Hayward Baker Inc. and AECOM. Aslan also demolished and then replaced a portion of concrete overflow spillway, securing the structure with more than two dozen grouted rock anchors. In addition, Aslan construct two grouted underground 3’ wide by 12’ deep “cutoff walls” across the Forest Service road to further secure fractured rock.

A number of complication arose in phase 1 that Aslan worked closely with CPW, AECOM, and Hayward Baker to overcome. Site access was an early issue, including determining an appropriate rock-fall protection plan on a cliff above the work area. During that assessment, a wildfire erupted in the area that forced a delay for nearly a month in June. Once the air cleared and rock protection was completed, drilling and grouting began and became clear early on that planned methods of grouting would have to be rethought and reengineered to insure the fractured rock was indeed being grouted.

Despite these challenges, all parties partnered well to see a successful end of phase one in the spring of 2014, clearing way for phase two.

The Association of State Dam Safety Officials noted in a press release that the award highlights a unique remedial design that advances the state-of-the-art in the field of dam safety and exemplifies the high professional engineering standards that dam safety requires. The awards committee considered four qualified nominations, and recognize Colorado Parks and Wildlife for the innovative and effective design components important dam rehab project.

The association notified Colorado Parks and Wildlife Dam Operations Engineer John Clarke of the award in July, and he accepted the honor on Sept. 12, as part of the Dam Safety 2016 Conference in Philadelphia, Penn.